By Bob and Janice Kollar

A Surprise Discovery in Gardone Rivera

We selected the town of Gardone Rivera on the shores of Lake Garda because of its proximity to the Sirmione Peninsula, and the archaeological site of well preserved “Roman Ruins”.

We usually plan some “open time” in our travel itineraries to allow us some flexibility to explore an interesting town, or museum, or just take a spontaneous side trip.

The “Vittoriale degli Italiani” (The Shrine of Italian Victories) Museum worked out perfectly and it was only five minutes from our hotel.  We actually discovered a fascinating introduction to one of Italy’s most famous, as well as, interesting personalities… Gabriele D’Annunzio.

©Travel Photo Interact – Place your cursor over any photo to enhance it. 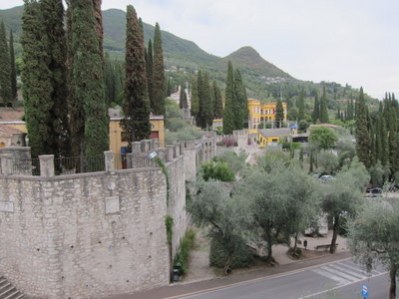 The final residence of Gabriele D’Annunzio is now a museum dedicated to his life and accomplishments.  A review of this incredible man’s life makes an excellent read, and provides an entertaining glimpse into the political side of Italy’s history leading up to World War II.

In the era before World War I, he was one of Italy’s most influential politicians, and a charismatic leader adored by his followers.  He served valiantly in the Navy, Air Force, and Army as a true war hero known for his boldness and outright courage. His many medals and awards are on display in the museum.

D’Annunzio was also regarded to be a national treasure.  A “Renaissance Man”… he did it all as an artist, poet, journalist, playwright, and one of Italy’s most popular, as well as, controversial writers of the 20th Century.

But another part of his lore was derived from his legendary affairs as he boasted to have seduced over 1,000 women.  Being married to a young aristocrat with three sons did not stop him from his constant affairs (sometimes multiple at once) throughout his adult life.

The Era of the Fascist Regime

During World War I D’Annunzio became a powerful figure and began asserting his very strong ultra-nationalist doctrine.  But at the same time Benito Mussolini was developing his movement with a more extreme right leaning tilt.  After the dust settled, Mussolini had more power, influence and aggression than D’Annunzio and created a more dominant form of Fascism.

The Dictator and The Poet

D’Annunzio supported Mussolini and his rise to power but did not participate in the Fascist political party, remaining neutral. One consistent thing; he did not like Germans and the Nazi movement and continually counseled Mussolini to avoid an alliance with Hitler… to no avail.

On the evening before a fateful assembly to determine the “meeting for national pacification”, the Poet was thrown out a window of his Lake Garda Villa onto the courtyard and his active career came to a bone crushing halt.

Two months later, Mussolini did his march on Rome and took control of the country.

Mussolini and his followers adopted a great deal of D’Annunzio’s ideas, his approach to government, his skills with motivating and influencing masses of people, the elaborate nationalistic ceremonies, etc… right down to the Roman Salute.

The Dictator kept D’Annunzio on the side lines and out of his way.  Mussolini was known to have said… “With a rotten tooth, you either pull it out, or fill it with gold!  With D’Annunzio I have chosen the latter treatment.”

So he vastly enhanced D’Annunzio’s villa into a monumental residence, and provided him a constant supply of cocaine… in essence he literally paid him to remain out of politics… the window drop would have done it for me!

Entrance to the Auditorium 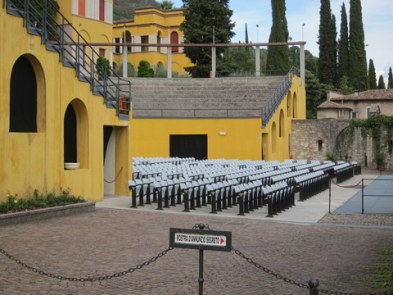 Also on display at the museum are his books, uniforms, medals and art work as well as a few of his war relic mementos… such as a torpedo boat, the front half of an armored cruiser, and even the hero’s airplane. 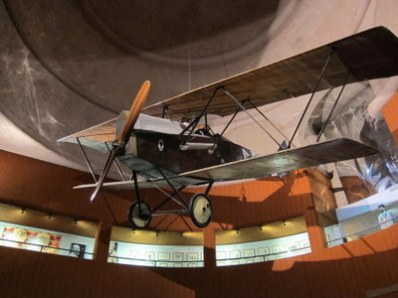 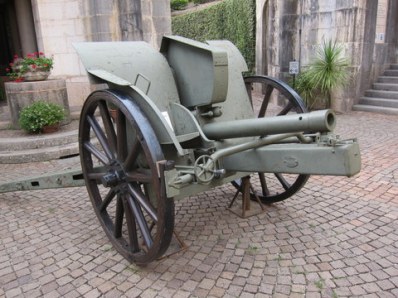 One of Many Military Installations

On March 1, 1938 D’Annunzio died at the age of 75 of a cerebral hemorrhage.  His funeral was a large Fascist state affair and Mussolini walked with his coffin.

Mussolini was quoted to say… “You may be sure Italy will arrive at the summit you dreamed of.”

The visit to Lago di Garda and the town of Gardone Rivera provided us with memories of beautiful scenery, excellent cuisine, and exposure to the absolutely wonderful, warm and friendly people.

A definite highlight was the surprise history lesson.  By leaving some “open spots” in your daily itinerary, it is amazing what rewards come your way.

Please follow us in the next article… Exploring the Roman Ruins of Lago di Garda.

After all, what is the hurry… be inspired.