A cruise to Spain on Holland America’s Nieuw Amsterdam showed us there are many contemporary reasons to consider the ancient city of Valencia as a top-notch vacation destination.

Since the time of El Cid – over the last thousand years or so – Valencia has seen Christian and Muslim conquerors come and go. Its history also includes being the birthplace of three European kings and two Catholic Popes. However, for the most part, Valencia played a quiet role in Spain’s colorful history – until the decade of the 1990s.

If Star Trek creator Gene Roddenberry (1921-1991) had lived to see the creation of the Ciudad de las Artes y las Ciencias by renowned Valencian architect, Santiago Calatrava, he might not have selected Marin County, California as the 2161 building site of the Starfleet Academy. Instead, he may have asked Senor Calatrava to design it for him in Valencia.

Construction on Calatrava’s amazing complex of otherworldly buildings began in 1998 along the old bed of the redirected Turia River at a reputed cost of more than $2.5 billion dollars.

The Umbracle is the huge promenade entrance to the City of Arts and Sciences. Numerous lofty arches are covered in verdant vines that protect a garden and several species of tropical plants and trees. Along the colorful walk you will also find the ‘Stroll of the Sculptures’ an outdoor gallery of nine unusual figures by contemporary artists.

The Prince Phillip Museum of Sciences opened in 2000 and its design is often said to resemble a whale’s skeleton, or a dinosaur’s spine. Whatever your muse, this magnificent exhibit is actually an interactive museum that will prove fascinating to anyone interested in the scientific disciplines that study everything from questions about The origin of the universe to contemporary issues like the enigma of climate change.

The Queen Sophia Palace of Arts sits amidst a setting of Mediterranean blue reflecting pools. When it opened in 2005, it became the signature performing arts center in Spain for opera, theater, and dance. At 248 feet, it is the tallest opera house in the world. The site encompasses four multi-purpose auditoriums and the smallest hall seats 400, the largest 1,700 people.

Proudly, the Queen Sophia Company hosts the Centre of Perfeccionament Placido Domingo, which is a celebrated program for young talented opera artists. As the name indicates, the program honors Spain’s most famous tenor, Placido Domingo. 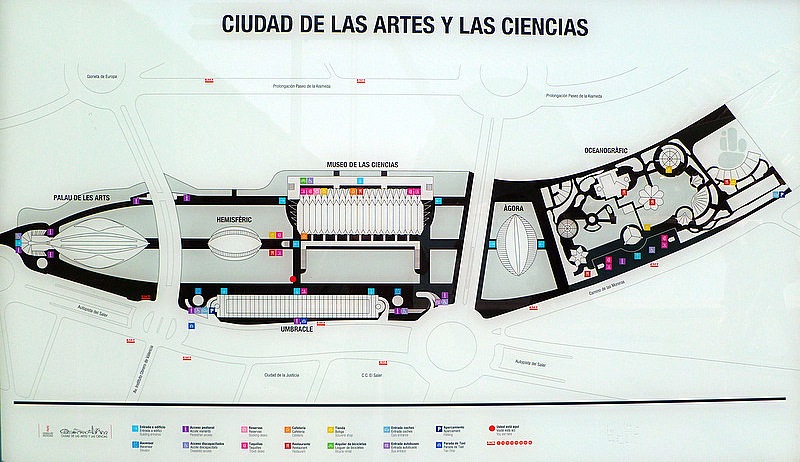 The Oceanographic is like an underwater city and is the largest aquarium in Europe. It features over 500 species of fish and mammal inhabitants collected from the world’s oceans. The oceanographic compound covers some 20-acres and includes an unusual aquarium restaurant with floor to ceiling glass walls where curious fish can watch you savor the catch of the day along with your paella.

The Hemispheric is a visually striking eye-shaped Planetarium in the midst of a stunning turquoise pool. This popular attraction has a computerized astro-projector that shows the night sky with all the planets and stars on a screen so large you feel like an astronaut.

There is also a laser show displayed on a 900 square foot screen, and visitors can watch IMAX and 3-D journeys through space. It is no wonder that the Hemispheric Planetarium is now one of the top five buildings visited in Spain.

The Agora is the latest structure created by Calatrava’s architectural genius. This surrealistic multi-use sports arena is 262 feet high and seats over 5,500 spectators. 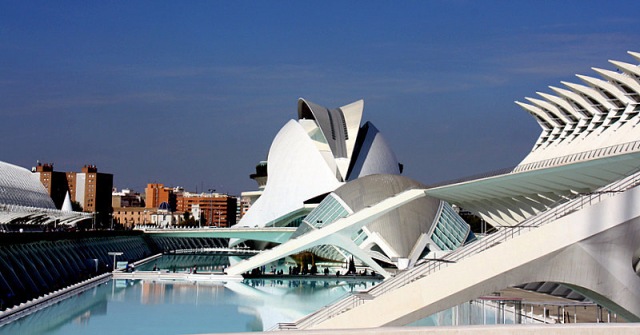 The various buildings of the Valencia City of Arts and Sciences have been called ‘techno-palaces’ and they certainly live up to the name. The scope of this unusual complex is breathtaking and an architectural marvel. The light, reflecting waters, shapes, and structural designs are a photographer’s dream. This is an intellectual Disneyland and could be a megalopolis base in the Galactic Empire in Star Wars. Speaking of which, do the views of the Palace of Arts remind you of Darth Vader for any reason?

Don’t miss the rest of Valencia

Visitors to Valencia will want to tour other attractions in the ancient city, like the Barrio del Carmen. Our bet is that your most cherished memories of Valencia will include both Calatrava’s brilliant gift of a glimpse of the future right along with the historic monuments of the past. 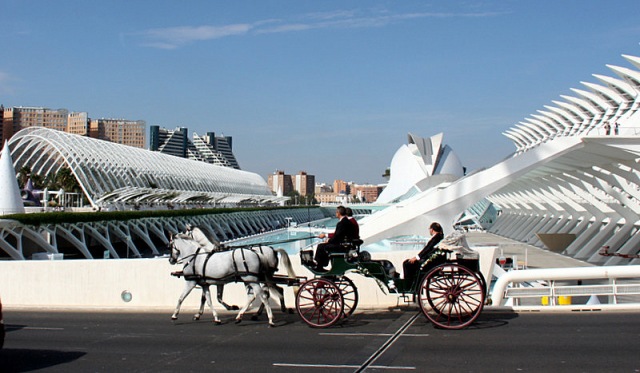 Valencia is 220 miles south of Barcelona on the sunny eastern coast of Spain. Valencia is easy to reach by all means of transportation.

We flew to Barcelona from New York, with a stopover in Dublin via Aer Lingus. We enjoyed the Irish hospitality in the air. Check out their flight schedule *here*. 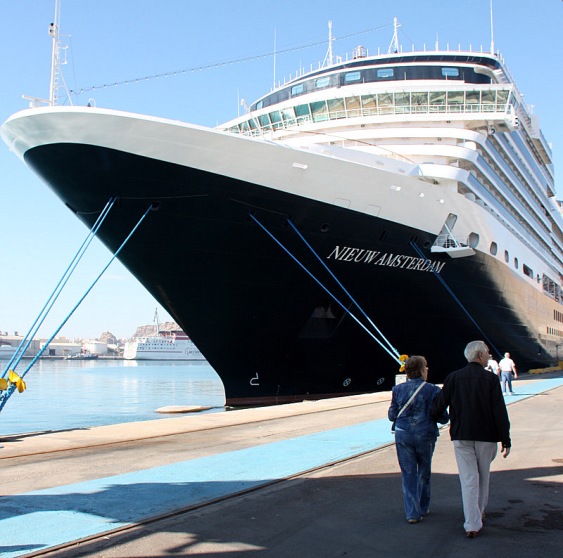 We then boarded the luxurious Nieuw Amsterdam for a wonderful trans-Atlantic cruise back to the United States. For more information, or to book a cruise on Holland America, click *here*.

© 2017 Travels with Wayne and Judy Bayliff