“The Blarney Stone,” is also known as “The Stone of Eloquence,” and it is both a legend and fact. If you have wondered about the location of this fabled icon, the answer is to be found atop the 12-foot thick walls of the bleak and eerie ruins of the magnificent Blarney Castle near Cork, Ireland. Come along and join our quest. 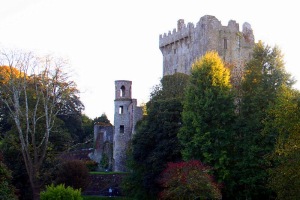 In early 15th century Ireland, a Munster king named Cormac MacCarthy constructed a grand fortress in the village of Blarney – upon the edge of a towering cliff near the town of Cork.

The castle top was crowned with a machicolation that was built about two feet out from the main building and held in place by a series of large stone corbels. The objective of this separate wall was to protect castle defenders from flying arrows while they dispatched attackers with hot liquids and rocks dropped through the opening between the suspended outer wall and the structure’s main wall.

The witch did it

During the castle construction, a good and grateful witch, who had been saved from drowning by a member of the builder’s family, placed a numinous power into one of the machicolation stones. Unfortunately, she chose a rock in the most awkward location on the battlement. The enchanted stone is set in the bottom of the outer wall positioned more than 5-stories above the ground.

The Leprechauns made it public

After the witch empowered the stone, she gathered the local Leprechauns and requested they tell all the “good people” of County Cork that anyone who had the courage to kiss her “Stone of Eloquence” would be rewarded with “the eternal gift of gab.”

Well, you know how Leprechauns are. Before long the whole of Ireland knew of the magical powers of the Blarney Stone, and within 100 years – the whole world knew.

If you visit Blarney Castle to see the famous stone, you may as well get the benefits of caressing it with your lips, because it is very hard to get a good look at the Blarney Stone without being in the kissing position. 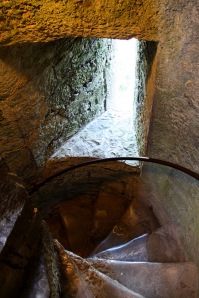 The witch did not make this an easy task. First, there is the long and laborious climb up a narrow spiraling rock staircase to get to the parapet. There is no elevator in the ruins. We counted 124 steps, but we may have missed a few.

Getting ready for the smooch

Once you reach the top of the castle and address the stone, the kissing effort requires you to lie on your back, grab onto two iron rails fixed to the outer wall, and wiggle and suspend your head and shoulders out into space in order to reach your objective.

We can tell you first hand that it is a good thing to be on your back during this experience, because you would not want to be facing down. Visitors who suffer from acrophobia have a difficult time standing close to the opening. 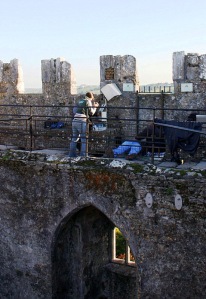 Not to worry, the castle provides an able-bodied helper to hold your legs while you stretch over the opening to put lips to stone. A note of caution that we learned the hard way – remove everything from your pockets before you assume the position.

Millions of kisses and still counting

300,000+ lip caresses a year have turned the stone’s kissing spot a rather dismal shade of dark gray. The color and sheen is understandable considering the many millions of people who have kissed the magic rock over the past five-hundred years.

No one knows the full measure of famous and eloquent politicians, actors, literary giants, and business and religious leaders, who owe some – or perhaps all – of their success to the magic of the Blarney Stone.

Blarney Castle is a first rate tourist destination with a fine gift shop, charming gardens, and a superb Rock Close that is said to be built on a former Druid ceremonial site. Check out their website at http://www.blarneycastle.ie

We flew from New York to Dublin on Aer Lingus. We enjoyed the Irish hospitality in the sky, you will too.