We live in California and two of our best friends reside in Florida. We wanted to visit them during the holidays, but didn’t want to endure the stress and aggravation of crowded airports and airplanes, and it’s just too far to drive – so an opportunity to sail from nearby San Francisco to Ft. Lauderdale through the Panama Canal was especially appealing.

Our cruise was an anomaly for a Holland America Panama Canal Cruise because the usual port of embarkation for the Canal trip is San Diego. However, it was our good fortune that the Amsterdam had been in dry-dock in San Francisco for a two-week spruce-up before our cruise.

That meant a few hundred lucky passengers got to see the dramatic glow of the San Francisco skyline during departure – we picked up the majority of the passengers for the Panama Canal Cruise two-days later in San Diego.

Our last few cruises were on much larger ships, those with capacities over 2,500, so a ship that holds 1,380 passengers and a crew of 607 felt compact, and just a little cozier because of it.

The first thing we noticed upon boarding the Amsterdam is that her color schemes are nicely subdued and her décor is a bit more refined than found on some of the newer ships. Of course, being a member of the Holland America fleet, she is elegant and uber-clean. 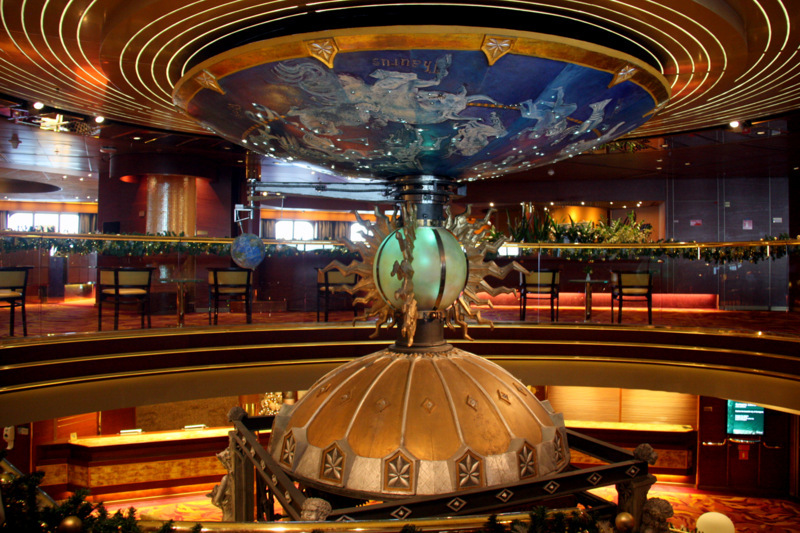 At the heart of the Amsterdam is the Planeto Astrolabium, a magnificent three-story structure that tracks constellations, and the planets. 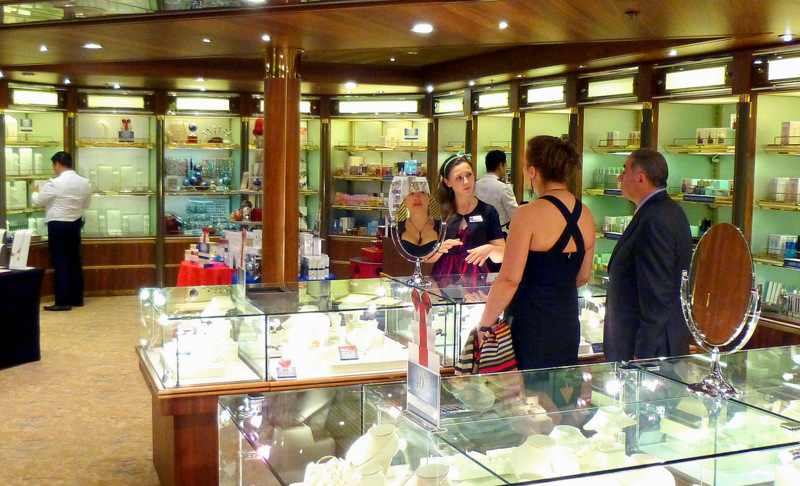 The Planeto Astrolabium is also the ship’s hub for customer service activities, and the area to find a bevy of nearby exclusive shops. 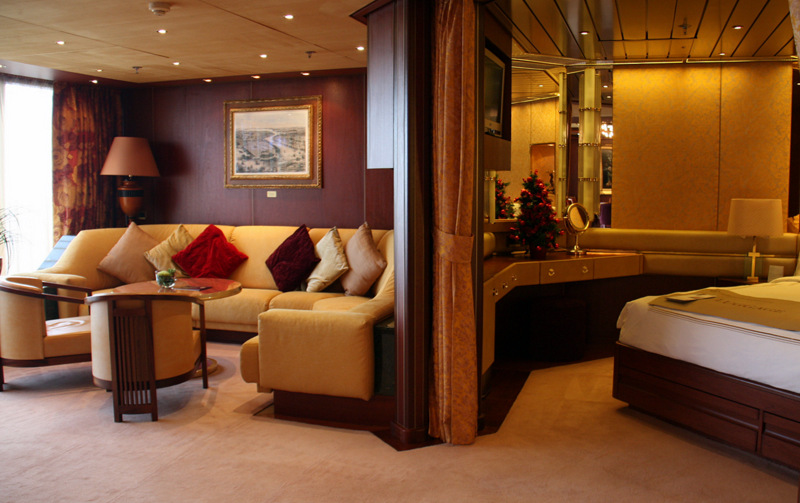 The Amsterdam’s suites are sophisticated and chic. 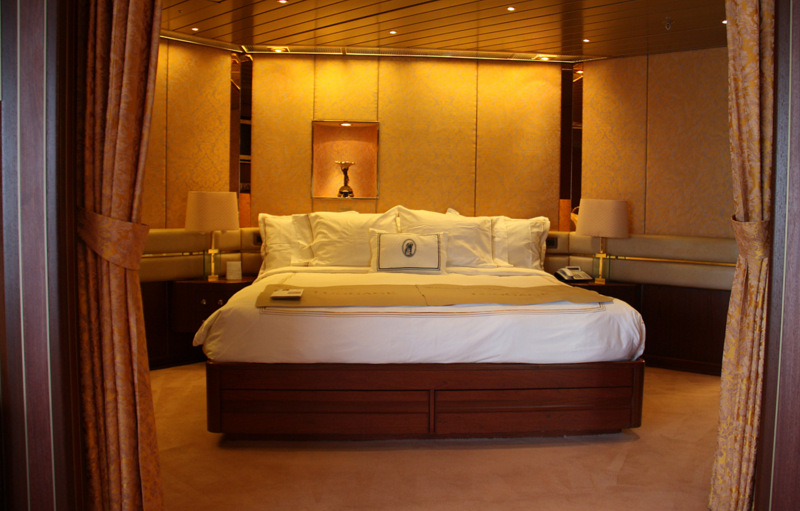 They are comfortable, classically elegant,

and successfully avoid being trendy and thematic.

They also reflect the natural allure of privacy at sea in graceful surroundings.

We learned very quickly that many of our fellow passengers were not disembarking along with us in Florida. Rather, they were continuing on for the 114-day round-the-world cruise. The Grand World Voyage itinerary is sailed by the Amsterdam, and a stalwart group of Holland America loyalists make the annual voyage. We did a story about one charming lady who is among those habitual world cruisers, and you can read about her *here.*

For those interested, the 2015 Grand World Voyage begins on January 5th and departs from Ft. Lauderdale, Florida.

Our trip encompassed both Christmas and New Year’s Day.

By Christmas Day passengers and crew alike were in a festive mood – a wonderful holiday spirit that was most evident at the crew’s inspirational holiday program entitled “The Sounds of Christmas Carols.” Hundreds of passengers genially joined in the crew’s evening group-sing.

The seasonal gatherings aboard the Amsterdam helped form a genuine bond between passengers and crew – all from different countries, cultures, religions, and life experiences – quite marvelous to be part of it.

The staff on Holland America ships hail mostly from Indonesia and the Philippines, but on our cruise there were also crew members from 32 other nations. All were accommodating and friendly – a sure sign they were happy at their work, and with their employer, Holland America.

Like all the other ship’s Masters we have interviewed, Captain Fred Everson set his sights on a life at sea from a very early age – he had a great mentor – his father was a captain on cargo ships. He subsequently attended and graduated from Holland’s maritime academy in Rotterdam, and joined HAL in 1980.

Everson told us, “My main concern as the Captain of the Amsterdam is the safety and pleasure of my passengers.” The captain informed us that Holland America has installed and is now testing the first thermal imaging system designed to immediately detect a person who may accidentally fall overboard.

When asked what he likes best about his job, Captain Everson answered, “It offers me an opportunity to see the world.” His professed favorite place is Antarctica, “I love the remote grandeur, topography, and animal life.”

With a work schedule of 3 months on and 3 months off, Captain Everson has ample time to indulge in his favorite pastime – motorcycle trips from his home base in Del Ray Beach, Florida. He has logged over 150,000 miles on motorcycle tours of North America.

When Captain Everson retires he plans to continue touring, “There’s so much I haven’t seen.” A few years back the captain purchased an RV to assist him in his roaming. Happy motoring Captain!

Eating aboard the Amsterdam

We found the quality and presentation of food aboard the Amsterdam to be up to the usually delicious Holland America standards. 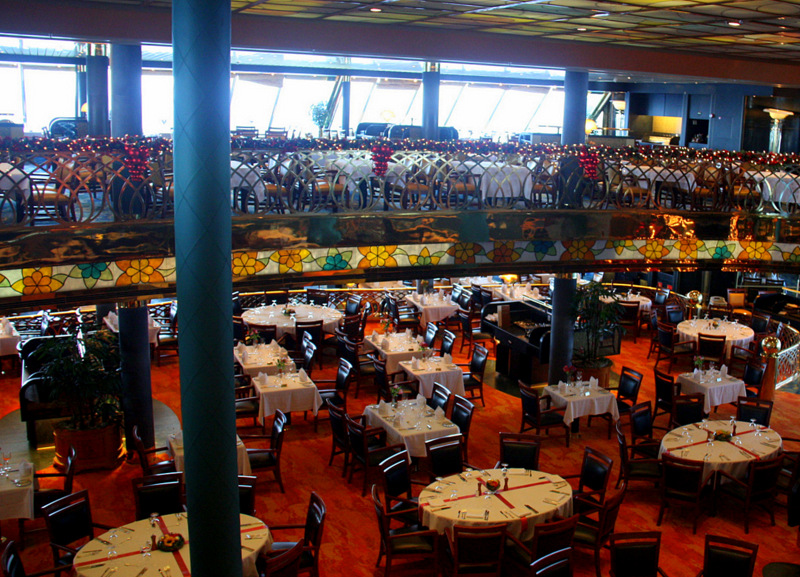 The main dining room is the two-story La Fontaine Restaurant and is well designed with numerous windows for abundant natural light during day-time meals.

Our table was next to one of the windows so we enjoyed constant vistas of the sky and sea while dining.

Many of our breakfasts were taken at the informal buffet-style Lido Restaurant, 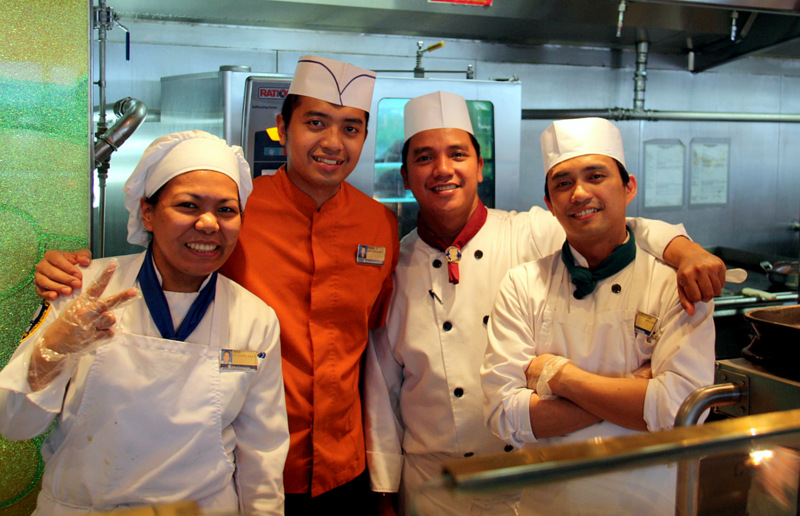 where we savored made-to-order omelets and a wide variety of meats, cheeses, cereals and fresh fruit and juices.

The Canaletto has introduced a new menu featuring Italian family style dining with some toothsome recipes.

We relished our starter of Vermouth Braised Clams with spicy chorizo, garlic and basil. 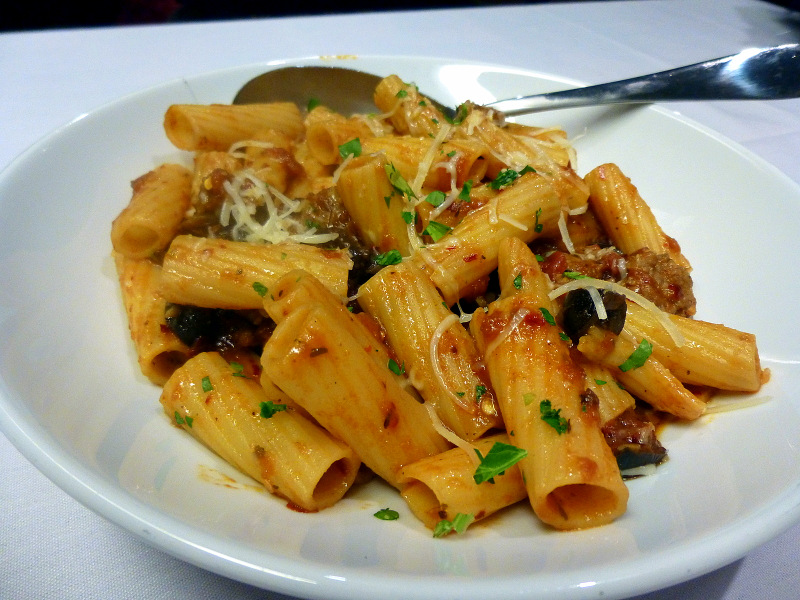 The Rigatoni with Italian sausage, Kalamata olives, and a spicy and delicious tomato sauce was a perfect pasta choice.

Everything was delicious, however we found it unusual that no breads or rolls were served at the Canaletto, an Italian restaurant. Perhaps that has changed – we hope.

The best steaks and seafood

The Pinnacle Grill is romantic and intimate and the favorite rendezvous of beef and seafood lovers. We were happy to learn that Holland American serves only seafood caught in a sustainable manner.

A Caesar Salad prepared at the table was an excellent opener, 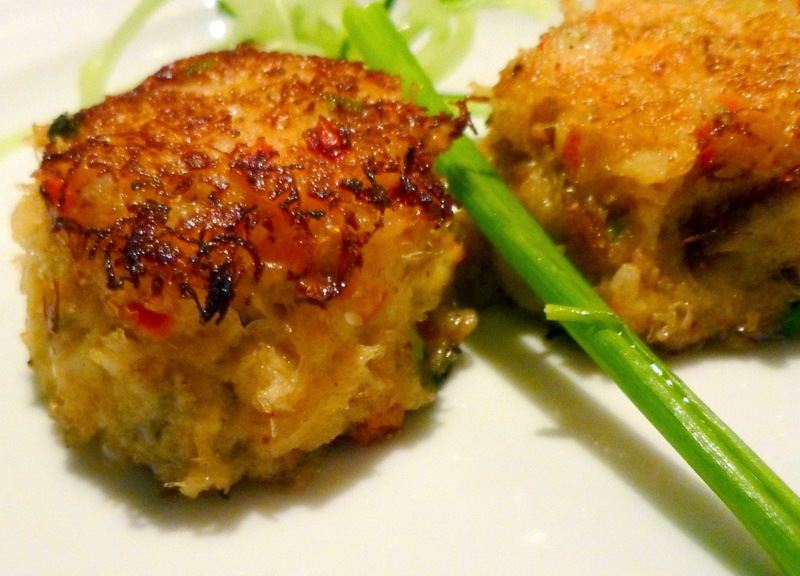 The filet mignon was a perfect size for a four-course dinner and was prepared with sun-dried tomatoes, and the master chef’s green peppercorn béarnaise sauce and maître d’ garlic butter. 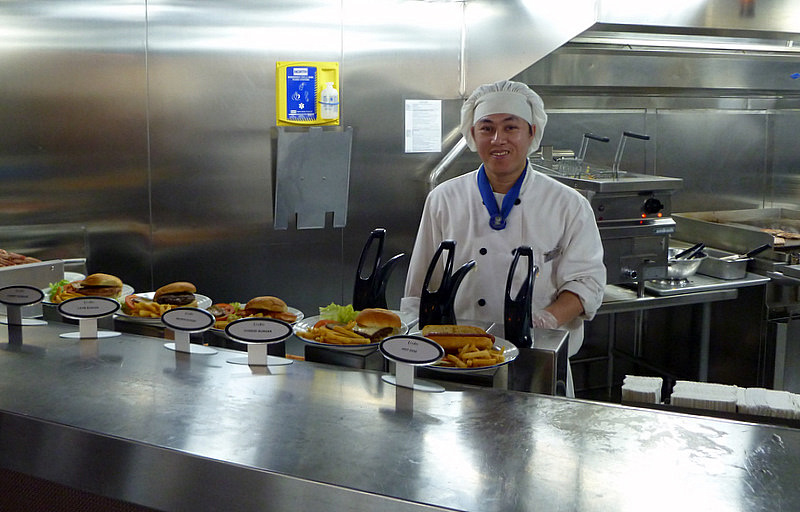 After shamelessly feasting for days on end, it was nice to occasionally take a breather and enjoy a simple old-fashioned hamburger, hot dog, or slice of pizza. The Terrace Grill poolside was a welcome, albeit brief departure from lavish dining. May we recommend an ice-cold beer for accompaniment?

About the cruise itinerary 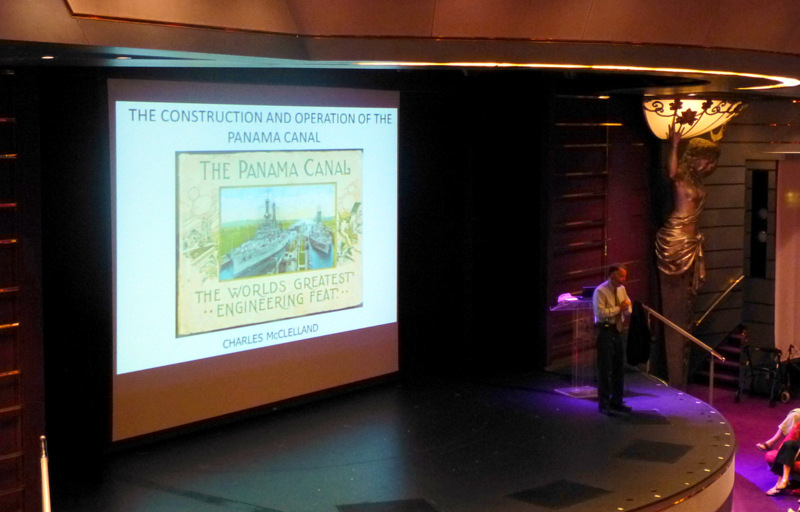 Our Panama Canal voyage on the Amsterdam started on December 18, and took 17 days, and covered 5,914 miles. The same trip was an arduous 13,715 miles before the advent of the 50-mile long Panama Canal.

The ports we favored were Cartagena, and Georgetown, but of course, the highlight of the cruise was passing through the historic Panama Canal.

In a future article we will write about all the ports of call on the Holland America Panama Canal Cruise and include a summary of the exciting history of the Panama Canal.

It takes about eight-hours to transit the canal’s three locks and navigate the lake that lies between the locks and seas.

The passengers were up at the crack of dawn to watch the Amsterdam approach the first lock,

and be tethered to the electric locomotives that guided her seemingly effortlessly through the narrow Miraflores Locks.

Once the Amsterdam was released from the second locks into Gatun Lake, passengers had several hours to observe the dark and mysterious waters and dense sweltering tropical jungle from on-high aboard the ship.

Everyone watched as the liner glided along patches of small uninhabited tangled green islands – all safely visible from the glass enclosed and air-conditioned lounges and public spaces on the Amsterdam. 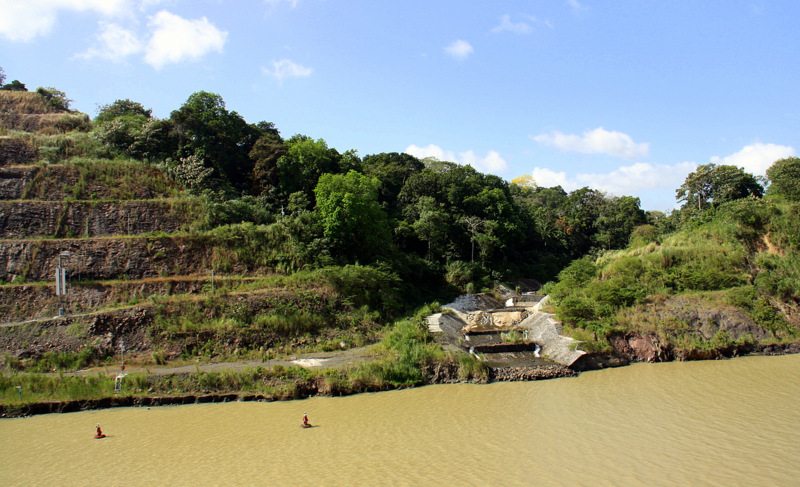 Our minds wandered and considered the lives of the thousands of diggers who suffered (an estimated 25,000 died) to conquer this hostile wilderness for the betterment of mankind. How fortunate we are to be able to witness the engineering marvel they created.

Check out the related video below for a brief depiction of the passage.

A trip through the Panama Canal is one of the most interesting cruises on this planet. We recommend it highly. 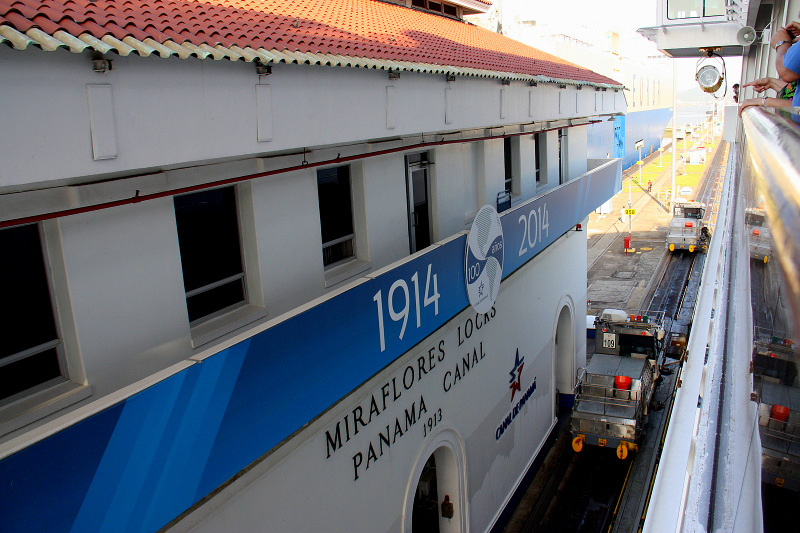 For more information about Holland America cruises, itineraries, and specials, look at their website at www.hollandamerica.com