Manta rays are amazing and curious creatures. People are fascinated by their opposing nature of ominous looks, and sweet dispositions.

The Sheraton Kona Resort on the Big Island of Hawaii pays homage to these gentle giants by providing a viewing area for visitors at the resort’s Rays on the Bay restaurant. 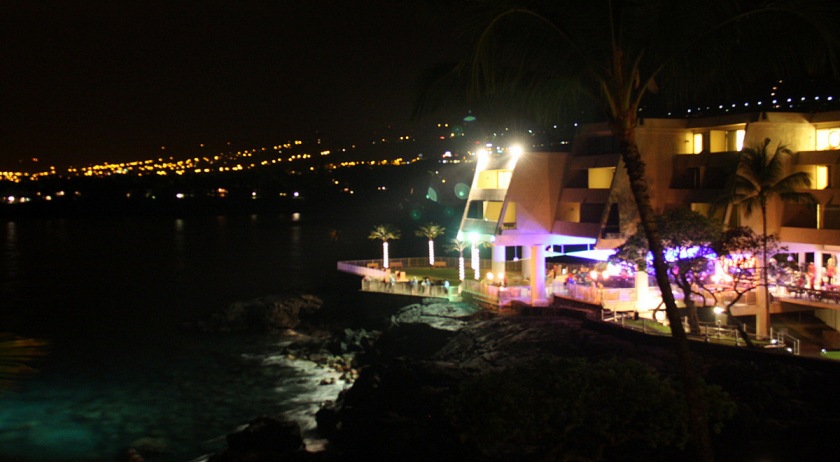 From the restaurant’s lookout, the magnificent and mysterious creatures can be seen gliding in the night ocean far below.

Guests can also attend a complimentary lecture about the manta rays arranged through the resort’s front desk.

The resort can also organize a water adventure to view the manta rays up close from a local tour boat named the Hula Kai – an opportunity we eagerly welcomed.

Swimming with the manta rays

Like whales, manta rays eat plankton. The plankton are attracted to light and that is the secret to successful manta viewing from the Hula Kai. Our excursion went like this:

We boarded the nearby Hula Kai at sunset and moved just off shore of the Sheraton Kona.  We donned wetsuits, googles, and a snorkel provided by the concessionaire. We were given a quick course on manta watching, which is done from a horizontal position floating on one’s stomach and holding fast to a length of 3” diameter buoyant pipe – set out from the stern of the boat much like a floating rectangle.

Soon darkness was upon us, and the Hula Kai engaged underwater illumination used to attract plankton to the site. We entered the water by ladder and positioned ourselves around the floating pipe. We looked down into the clear bay water and breathed through our snorkels.

Our bodies were made buoyant by the wetsuits, so maintaining our balance was not difficult. It did not take long before the first of six manta rays appeared from out of the shadows – and the fun began. 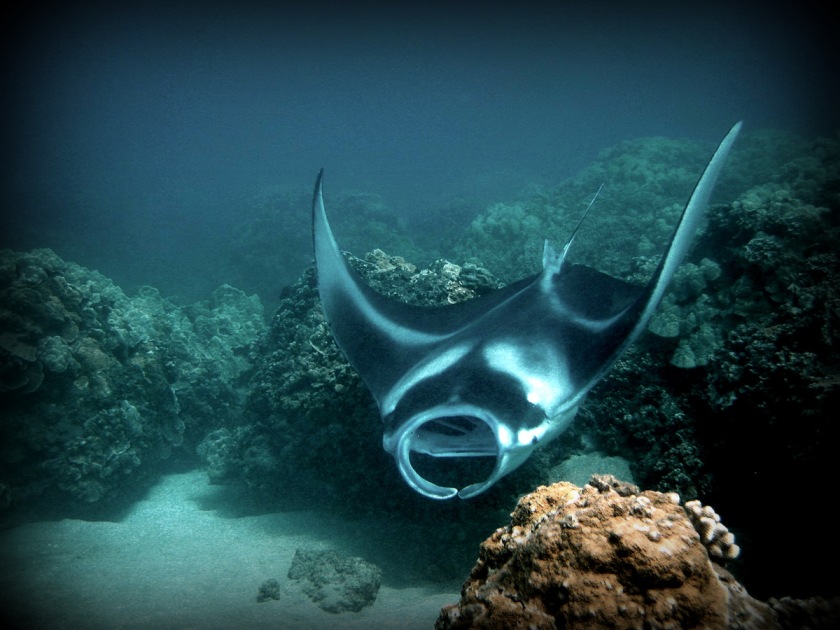 Manta rays are big, but harmless to humans. They, like the whale, are filter feeders. Mantas are fish related to the shark, but have no bones, teeth, barbs, or stingers. However, they do have size – up to 2,000 pounds – which they use in a very good-natured way.

Manta rays are often given names by the crew of the Hula Kai. Each ray has distinctive “spots” that make identity possible.  The same rays tend to return for evening dining and playing with the snorkelers and divers.

For a period of about one-hour we watched these graceful giants do underwater summersaults just below us – performing like rolling acrobats with gray tops and white underbellies.

Although touching the mantas is not allowed, the creatures have no such restrictions. Frequently, one or more of the rays did a graceful roll just under a snorkeler and purposely pressed its sleek white underbelly along the length of the viewer’s body – an exciting encounter that will be remembered by anyone that experiences it.  The top of a ray feels like sandpaper, and the underside is as smooth as velvet.

Tempus fugit, so do it while you can

Click *here* to read our story and see pictures of the beautiful Sheraton Kona Resort on the Big Island, and *here* to check out the resort’s website. To read about all the services offered by the company that operates the Hula Kai Manta Snorkel, click *here.*

You can see the world with Google Maps. www.maps.google.com

We flew to Hawaii on Hawaiian Airlines